Some of you may remember my post of how frustrating it was to assemble 11 out of 12 Ohio Star blocks WRONG. My only explanation is that I thought this was an easy pattern, and I knew what I was doing - so I was just pushing the fabric through the machine like a woman on a mission.

The goal I set for the ALYOF this month is a custom quilt that I was supposed to have finished by mid-March. I had a few setbacks, so I had to push the delivery date by a week. May I now present to you the newly finished, properly assembled quilt, Irish Stars:

Only 1 block was assembled correctly! The rows are assembled here.

Let me update you on how the finish came about on this beauty...

I very carefully ripped out the seams surrounding each of the turned quarter square triangle block one at a time, then resewed each. This was more difficult than it sounds because each row was assembled, and as you can see in the picture on the right, those small stars have the light background fabric bordering them. When I assembled the rows, I figured it wouldn't matter which way the star blocks were turned (and it really doesn't - they are completely symmetrical) but there are two rows of background fabric surrounding each star, and if the block was turned like in the picture below, the long seams that are easy to rip and access the centre run horizontally - meaning I'd have to rip out lots of stitches, or try my luck at partial seams.

So I started by ripping out everything and reassembling each block - but after doing 3 like that, I was really tired of the seam ripper, so I moved to Plan B of ripping only what I absolutely had to to remove and turn the offending units. This method was quicker - but more stressful because I did have to refix some seams because there would be a tuck in the fabric.

Happy that I was doing well, I sewed each row together after I fixed the star blocks in it. It was a happy day when after 12 hours of rework, I had a newly assembled quilt top!

Nope, I didn't fix ALL the turned units. Found this one while pin basting the layers together. UGH.

I had a brand new package of queen-sized Hobbs Heirloom 100% cotton with scrim, so I didn't worry about running out of that.

And because I was planning to take 3 widths of fabric to make the backing, I was sure that 9.25yds was enough to make a one-fabric backing.

Does anyone see where I'm going with this?

The batting is too short! By less than 3 inches!!

I was confident that I had fixed all the orientation errors, and that I had properly measured the backing fabric, so I started pin basting....from the centre to the left side. Everything was going great. So I slid the fabric up and continued pinning that entire half of the quilt.

Then I shifted the quilt so I could baste from the centre to the right side. I was pinning the second block from the edge when I realized I couldn't see any batting under the top.

I checked to make sure I hadn't missed a folded under edge of batting - no such luck! The batting was too short!

No problem. I have lots of 4-6 inch batting bits that I've cut off other quilts when I was squaring the quilt before binding. A quick search of the closet found one piece long (and wide) enough to do the trick. All I had to do was run a wide zigzag seam and presto, everything would be great. I was happy and about to pull the quilt (still mostly basted together) to the machine for the quick seam when I noticed the one Ohio star block that still had one set of points turned.

That's when I decided I'd better do a through look at the top to make sure it was perfect. Only that one oops, so I could fix that. I decided to double check that the batting shortfall was consistent along that entire edge. It wasn't. Odd - a brand new piece of batting wasn't mostly square?

Nope. It was the backing fabric. I had measured the backing fabric by stretching the top along the yardage of backing fabric, then added a hand width. I cut all 3 pieces of backing fabric the same width by laying them on top of each other. I did not notice that the cut from the fabric supplier wasn't straight. In fact, it was off by about 1.5 inches. I guess when I measured, I had the long side of the cut in my hand.

Irish Stars - the back looks good!

Fortunately, I had lots of extra gold fabric from top, so I cut a 6.5 inch strip and inserted that stripe into the centre of the backing.

It's hard to tell in this photo, but the gold strip is centered on the quilt.

Layering and basting the second time went well. I was feeling my quilting mojo coming back!

After so many little errors slowing me down, I was ready to get quilting! I wanted a simple all over design - something forgivable and easy to do!!

I chose a meander design, using a varigated brown/orange thread from Aurifil on the top, and a purple/blue varigated thread from Superior Threads for the bobbin.

I was so totally happy with the thread choice and the quilting pattern! So I ironed the binding and set to sewing it on.

I was almost 3/4 around the quilt when I found a flaw on the backing fabric. There was a mark about 7 inches long that looked like the fabric had brushed against a knife edge.

To say I used profanity would be an understatement. I stormed about the sewing room, shaking fists in the air, bellowing every curse word I could remember. It didn't really help. I still had to find another solution to my problem!

I carefully looked at the wear on the fabric. It was hard to see on the patterned fabric, but I knew would turn ugly after a few washings. It was close to the edge, maybe only 3 inches away. I decided to unsew the label I had already attached to one corner (which meant ripping the binding past that point) and make a new label to fit over this bad patch.

I do love this pattern. It was featured in the July/August 2014 issue Quiltmaker, and is designed by Jo and Kelli Kramer. And despite all the issues that arose in assembling this one, I would happily do it again, especially in some warm earth tones. It would be awesome done in a patriotic theme too!

To make everything better, my client was thrilled with the finished product. They were very understanding when I relayed that I would have to push the delivery date by a week to give them a durable quilt they could use for years. Thank you Allen! 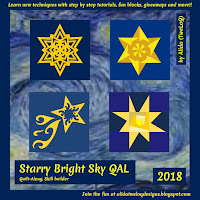